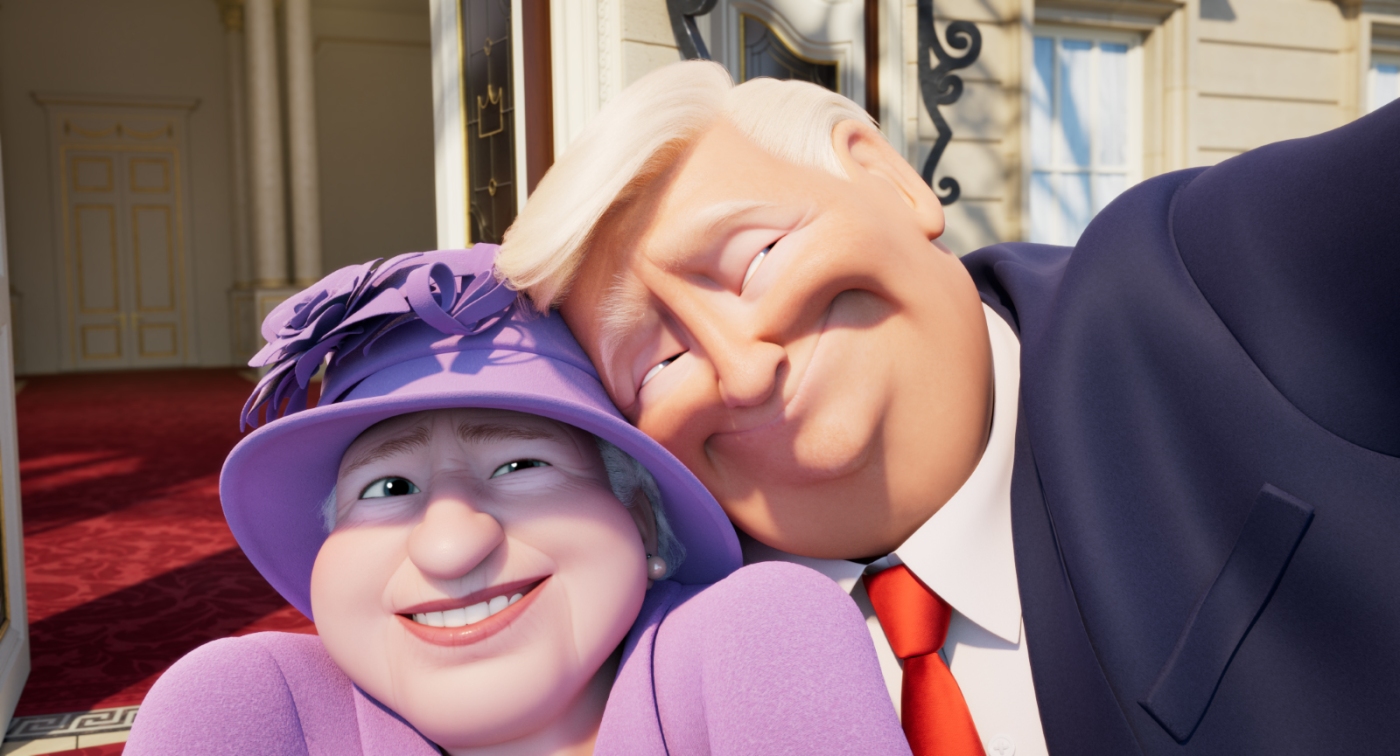 Opening with a quaint montage and a lot of promise, Prince Philip (Courtenay) gifts Queen Elizabeth II (Walters) a lovable Corgi puppy called Rex (Whitehall). The little rascal quickly endears himself to his new owner and becomes her top dog complete with his own Coronation. However, jealous of the affection lavished on him by Her Majesty, another of her dogs deviously plots Rex’s demise.

The solid foundation starts to crumble once President Trump (Culshaw), Melania (Stephenson) and their own pampered pooch, Mitzi (Hadland), arrive on a state visit. Cheekily poking fun at the First Couple, this, ahem, caricature of America’s leader is more concerned about taking a selfie with “Liz” than discussing politics.

Meanwhile, one mishap after another takes Rex from Best in Show to Pedigree Chump when he finds himself in grave danger away from the comforts of Buckingham Palace desperately hoping to be retrieved.

The animation looks good (although Pixar certainly won’t be losing any sleep over it), the relationship between our Monarch and her husband is fun, and a jaunty score by Ramin Djawadi accompanies the action, but the script is devoid of charm and low on laughs. Aside from a few slapstick moments that just about raise a smile, there’s little else to warrant waving a Union Jack flag in celebration.

The main issue is the astonishing decision to include a storyline focusing on sexual harassment. Rex tries desperately to fend off the unwanted interest of Mitzi however, no matter how many times he says, “no”, she continues her predatory advances. This isn’t even a brief scene. It goes on and on and is even revisited later in the film with a different male character. Perhaps being an animation about dogs the subject matter isn’t meant to be taken as seriously, but the frivolousness with which this is addressed is completely inappropriate for the target audience. If that’s not enough, there’s also a distasteful ‘gag’ about a gay man.

When handled properly, sensitive issues and social commentary in animation can be more powerful than in live-action films. You only need look at the Toy Story franchise or Coco for proof of that. Death, separation and love are explored in a poignant and dignified manner. Not so here.

Utterly forgettable with a hugely talented cast going to waste and barely a redeeming feature, The Queen’s Corgi well and truly belongs in the dog house.

The Queen’s Corgi barks up in UK cinemas on July 5th.